This set includes six jumbo eggs with an emoji face on each one.  There are also five emoji plush which measure from 5 to 6 inches across.  My set included a yellow star with sunglasses, a pink “poop”, a round kiss face, a red space devil, a purple “poop” and my personal favorite a “See No Evil” monkey. They each have unique embroidered faces. They are made from Polyester and are recommended for ages 5 and up. 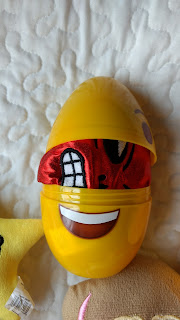 The eggs measure 11 inches around in width and 15 inches around in height.  They each have a different emoji face from glasses to laughing. The face is printed on, so caution should be taken not to scratch them too much. The emojis do fit inside the eggs, but you do have to squish some of them.  They do pop back to shape.

These eggs with plush are perfect for Easter Egg hunts, Easter baskets and surprising that special someone.  They are soft and squishy and do not have a weird odor.  They are sure to delight boys, girls and kids of all ages.

Although I received a sample, this is my own opinion.

These Easter Eggs feature a unique emoji design that kids are sure to love.  This set include two large Easter eggs.  There are also 12 emoji key chains.  The key chains are also a fun puzzle cube.  My kids love to put key chains and other clips on their back packs.  These are not only cute, but they also give the kids something to do on the bus.

The 12 key chains easily fit into the two included eggs.  So you can give them all to one or two children.  Or do what I will probably do and spread them out through other eggs.  These eggs are perfect for Easter baskets or Easter Egg hunts.

These emoji eggs with puzzle key chains are great for Easter egg hunts, Easter baskets or handing out to your favorite kids. They make great rewards for good behavior.

Although I received a sample, this is my own opinion.
Posted by Unknown at 12:11 PM No comments:


Today I will be reviewing some fun Easter Eggs featuring emojis. Up first is the “2 Jumbo Emoji Easter Eggs Filled with 12 Emoji Magic Cube Key Chains”.  They can be found here on Amazon.

My family likes to do an Easter Egg hunt for all of the kids, and these eggs are just perfect.  They are oversized, so you don’t have to just limit yourself to tiny little prizes or candy.  You can get some decent sized items into these eggs.  You can fit a plush toy, several candy eggs or a pack of crayons and small pad, if you take the crayons out of the box.


My kids love emojis, so these eggs are just perfect for them.  The faces aren’t too girly or boy-ish, which is great for older kids.  I have three boys and a one girl, and I know how hard it can be to find thing that work for boys or girls!


Each egg has a fun face on it.  The eggs can be mixed and matched.  This can create some crazy face combinations! It also means that you aren’t scrambling around next year, trying to find a matching top and bottom.  To save on costs, we re-use the eggs year after year, and finding matches can be time consuming. 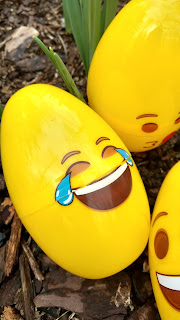 These Emoji eggs make a great addition to your Easter egg hunt. They are also perfect for Easter baskets and decorating your home.  Although I received a sample, this is my own opinion.
Posted by Unknown at 11:52 AM No comments:

My latest quilt is based on a photo that I found. There were no instructions or tutorial that I could find, so I just had to wing it. This is the photo I used for Inspiration Photo credit to Nannette.

I drew a simple scale drawing to figure this out.  The nightstand that I wanted the quilt to fit was 16 and 3/4 inches by 11 and a half inches.  My drawing's scale was one half inch to an inch. I laid out the circle of the sunflower based on the photo and also what I thought looked good.  Then I drew the petals free hand.  I did measure the photos in the drawing to get an idea of how large they are. The photo was of course, not the right size.

Next I picked out green fabric for the background, brown for the center and yellow for the petals.  The brown had more white in it than I would prefer, but I think it turned out nicely.  I counted the number of strips of green and yellow petals in my drawing to know how many to cut.  And I cut out several extras so that I could play around with how things looked. 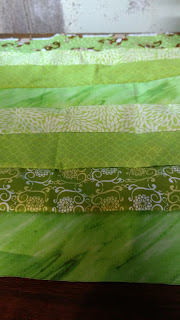 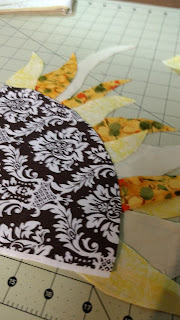 Once the I had a lay out that I like, I pined it the green background. Then I appliqued it on. To sew curves or turns on the applique, I keep the needle down, raise the foot, turn it, then lower the foot.


Once the top was done, I made a "quilt sandwich" (layer your quilt all together), pinned it and quilted it all together. This was the first time that I have quilted using anything other than straight line quilting. I used green thread because I wanted it to stand out against the yellow flower petals.  I followed the lines of the green fabric, until I got to the flower petals.  Then I followed the petals.  This was the fun part for me!


I chose a pink, gray and green back ground fabric. I like to use the self binding method, mostly because it doesn't mean messing around with my nemesis, bias tape.

I received a sample to review this item.  This review reflects my opinion and my first impressions of it.

These meal containers are great for prepping your food ahead of time.  They have three compartments, and give you plenty of room for lunch or snacks.  This package contains ten containers, lids and utensils.  This means that there is plenty for a weeks worth of meals.  And you don't have to dig around for a fork in the morning.  Just add the included wrapped utensil and you are ready to go.

I find that I reuse these containers over and over.  They are great for putting away leftovers at night.  They can be hand washed or washed in the dishwasher, which makes them easy to use and maintain.  They are also microwavable.  They also all fit together, which is great for storing them.  I think we have all bought mismatched containers, and then you have a cabinet full of parts.  With this set, you have ten containers and lids, so you are sure to have to matching ones clean. 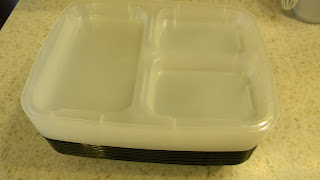 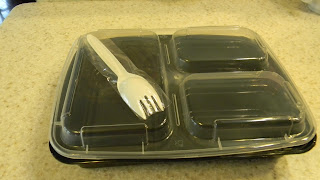 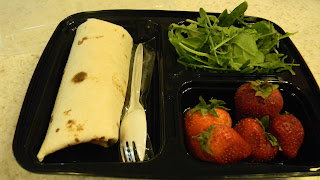 These are made from plastic and fit together well. I found I had plenty of room for a healthy lunch.  I know it is much easier to stop by a fast food place. I even stop to get fast food on the way home from the gym.  With this containers and a little bit of planning I can have a healthy meal that is much cheaper.

Posted by Unknown at 2:53 PM No comments: